According to the Archaeological Survey of India, more than three thousand five hundred sites and monuments are under the ASI’s protection as monuments of national importance. Directorates of Archaeology of different States have notified other monuments as being under their care. And there are other ancient monuments which are not under any official protection. All these form part of India’s, and indeed the World’s, heritage.

The Constitution of India enjoins upon all Indian nationals to protect and preserve this heritage.

Laws enacted after India became a sovereign State on 15 August 1947 prohibit the removal of antiquities, whether protected by any official agency or not. These laws also prohibit the export of antiquities (“smuggling”). When such removal (“theft”) takes place from an officially notified site, the offence is greater.

Yet no one interested in archaeology and the arts can be unaware that there is a steady stream of thefts and smuggling of antiques from the country.The laws of the country are violated by these actions; and the context of the art is destroyed, monuments and artistic objects are mutilated.

The concerns of scholars and those interested in Antiquity on the one hand, and of smugglers and those who sponsor/promote theft on the other are opposed to each other. The scholar aims to understand the true context of antiquities, a smuggler/dealer works for profit. The scholar’s aim is to establish the time and place of an antiquity, a dealer may conceal the provenance of an antiquity, he may declare false provenance to cover his tracks. The scholar’s aim is to preserve the antiquity intact, a smuggler/dealer will not think twice before mutilating it, cutting off the head of a sculpture to steal, smuggle and sell it if he finds this convenient.

In the case of miniature paintings, manuscripts can be mutilated to steal individual paintings, destroying the “wholeness” of a work of art.

In this way, scholars and smugglers/dealers are working at cross-purposes, knowledge and profit.

The photographs of Atru in Rajasthan on the Home Page of this website will exemplify how an archaeological site’s context can be disturbed. One of the alerts about the Brahma from Devangan in Rajasthan, which was mutilated by sawing off the side figures when it was offered by an auction house, will exemplify the mutilation.

No centralized documentation exists in India about thefts or smuggling of art objects that includes actionable information, such as the name of the site from where a theft took place, the description of a stolen antiquity, its measurements, photographs, and details of the first information report with the local police (FIR). Theft may occur from a shrine in a small village unknown to most people, and although an FIR may have been lodged, the fact may never become generally known, the sculpture may be illegally exported and sold.

In many instances, FIRs are without photographic evidence, and if the stolen objects were never published before, that makes it easier for the smuggler to fabricate a false provenance to deceive his customers.

It was felt that public documentation should be prepared about art theft/illegal export for the use of the scholarly community and international security agencies. Such documentation accessible to anyone may also serve to discourage smugglers and unscrupulous collectors since they cannot claim ignorance of the origin of the antique offered in the market once specific information is placed on the website.

Therefore, since the year 2005, and more regularly since 2010, E-mail alerts and letters with all essential information about antique thefts and smuggling are being circulated to scholars, museums and international security agencies.

From now on those alerts will be available on www.plunderedpast.in

In the past, some smuggled sculptures could be traced by means of information distributed to a number of recipients including the security agencies. For example, two sculptures stolen from a notified monument in Rajasthan in 2009 were recovered after an alert was issued and they have now been brought back to India on 6th March 2017.

Pictures of the two sculptures can be seen here: 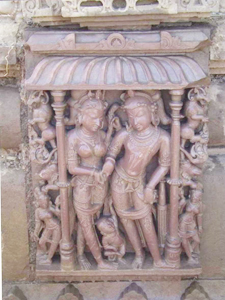 There are also other instances, such as three Nayikas from Nagda in Rajasthan, which their purchasers have offered to return to India after it became known that they were stolen and clandestinely smuggled out of the country.

With this permanent website, you can access the past alerts. Fresh messages will continue to be circulated as before, and will be pasted here. When some sculpture about which an alert was issued is located and repatriated, that fact also will be announced.

This website is an individual effort, but the entire archaeological community is invited to share information and photographs in their possession.

Those wishing for more information on the subject of trade in antiquities and other related matters are invited to see UNESCO’s Guidelines, and the website of the Archaeological Survey of India www.asi.nic.in.